I don’t have any bumper stickers on my car.  One day, I’m going to find the courage to commit and put one on the back of my amazingly awesome Mom-mobile also known as a 2006 Toyota Sienna.

This morning I saw the one I’ll start with.  It said, “I do my own stunts” and featured a person flying through the air.  I liked it because it affirmed a recent realization: I don’t value a lot of my own work. It doesn’t make sense yet, but keep reading and it might.

But my things to do lists are always longer than my time to do things so I end the day looking at five or ten things I didn’t get to.  This became discouraging.  So I changed my methodology and frankly, I think it borders on genius.

I now make a “things I’ve done list.”  And I don’t shy away from capturing my accomplishments, friends.  Did I shower and get dressed?  That counts.  Read four picture books to my son?  On the list.  Cook dinner for my own family and a friend’s family?  Two entries, right there.  Have a baking day? Every item baked is an item I’ve done.  Have a hard conversation with someone?  It didn’t keep me from my work, it was my work, and so I record it. Write in my journal? Write a few thank you notes? Send encouraging texts to my friends? Care for the souls of others? All of it is on that list. 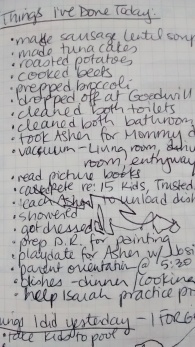 My daughter’s scribbles add some artistic interest to my log.

When I read this post on how to bullet journal (I have my own version of how to bullet journal but I love this article and it’s really the only one you ever need), I realized that I was creating a log.  By creating a log, I am valuing what I actually do each day.  Some of the log represents significant accomplishments that anyone would recognize as such.  Some of my log represents the way I pour into the lives of others that don’t feel important enough to write on a things to do list.  But since I’ve done them, they qualify.  As I consider them, I see their importance.

I’ve started including “being” activities too.  Maybe you’ve heard people say, “You’re not a human doing, you’re a human being.”  Yes, and thank you for the reminder.  Instead of feeling like I’m wasting time or being selfish when I sit down to practice painting a watercolor sunset, I add it to my log and think, “Way to invest in something you love! Way to become more human!”

Reading a book to my four year old before he takes a nap?  Incredibly valuable.  But until I started valuing my work enough to log it all, I didn’t see how much I was able to do in a day.  Now I’m patting myself on the back for doing my 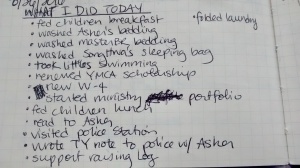 I did a lot of laundry that day.

own stunts, and writing it down.

Last night, my eight year old son and I went on a couch-to-5K run together.  His friend, our neighbor, joined us for the first part of the walk/jog.  After we dropped the neighbor off, we decided to keep walking and have a little time to talk.  (I love that my son wants to do this so much that I could do cartwheels in the street.  But I act cool.) 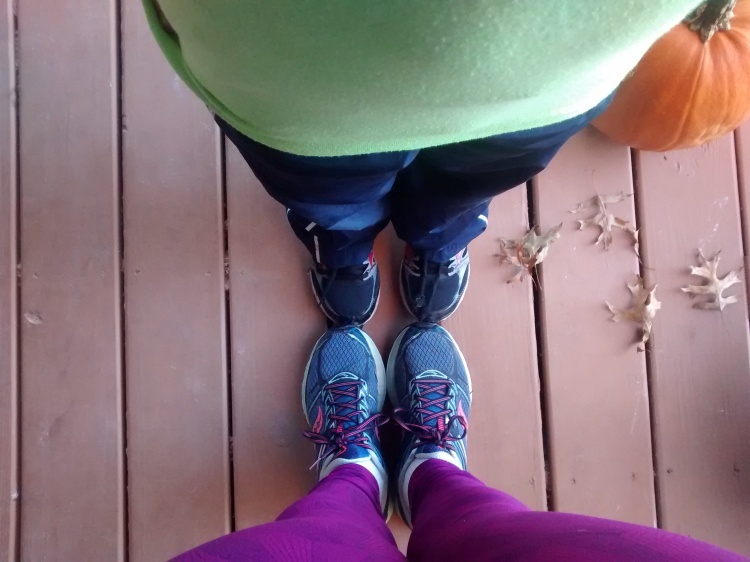 I noticed a beautiful butterfly, brown and blue and yellow wings struggling, resting on the pavement.  My son knelt down and started to cup his hands around the hurt creature.  I told him instead to find a twig and we would coax the butterfly onto the twig and off of the street.  We did, it worked, and the butterfly stayed in the grass.  As I walked away, I said, “He will probably die.  But I hope he will die better than if he got run over in the road.”

My son answered, “I wonder if someone wants to give us a compliment.”

I pressed, interested in what he meant but totally clueless.

“God, Mom.  I bet God wants to give us a compliment.  Because we took care of one of his creatures.”

I loved that my 8 year old son knows that God sees us and actually likes us and the things we do.  I didn’t learn that until I was well over 30.

We started guessing what kind of compliments God, our heavenly Father, would give us.  I started listing ones I thought he might give my son.  As a parent, I think I had some good ideas.  Some my son accepted; one he told me was just dumb.  (I acted cool again.)

It was fun but by this morning I had completely forgotten the entire exchange.

On Wednesdays, I often a join a community that fasts together for 24 hours.  I love it.  It is just what I need but it can feel like a bitter medicine.  With no lollipop afterwards.

I sat in the lobby at my YMCA so I could accomplish a few tasks while my daughter was in the free childcare.  The invitation to fasting for me in this season is an invitation to silence.  Since I cannot control the amount of silence in my outer world, I ask God to show me how to enter inner silence and hear his voice.

My heart was quiet and a voice piped up.  I don’t even know if I can write down all it said but there were no compliments.  I started listening.  If you would plan better, your house would be clean.  If you exercised more faithfully, you wouldn’t still have 10 pounds of baby weight.  You don’t do enough.  You’re actually pretty lazy.  You should do more.  If you tried harder…

Wait.  Stop.  This was not the voice of God.  Condemnation comes from someone but it isn’t the Triune God.  I know his voice.  He tells me hard truths.  He invites me to drastic change.  He has journeyed with me through massive transformation of the soul, mind, body.  His voice is not always easy but it is always love.

Seeing a blank note card in my bag, this crazy idea floated through my mind.  Write yourself the compliments you think I’d give you.

I’m in the middle of the Y lobby.  I’m already a little teary.  I’m hungry.  I’m going to cry in front of a lot of old men who are having coffee after their morning swim.  Oh, alright.

I listened to a podcast this afternoon as I cooked dinner that featured the best advice people had ever received.

The one piece of advice that stood out to me was given to a young mother with 4 children.  She said that she spends the bulk of her day doing things that will be undone: feeding children who will get hungry again, washing clothes that will soon be dirty, cleaning up toys that will be on the floor tomorrow.  The best advice someone gave her was to do one thing each day that cannot be undone.

She writes in a journal, or paints one wall in her home, or does one other long-lasting thing each day, grounding her life with meaning and permanence.

I really liked this idea.

I thought about the many ways I could concretize (is that a word? I don’t think so.) my days into something with permanence.  I could write more on the blog.  I could do things that make my largely invisible existence more visible. I could finish painting the fourth wall in my dining room.

Moses’ prayer in Psalm 90 came to mind: “establish for us the work of our hands.”  I could definitely (and might) choose to do one thing each day that can’t be undone.  It sounds like a fun thing to add to my list of things to do.  But mostly I think I will pray that God’s grace (Moses prays that God’s favor would rest on his people directly before asking for the establishing of the work of their hands) would make the largely unseen and mostly undo-able work I do each day count for something permanent.

In the lives of those I love and in the humility I learn, establish for me the work of my hands.